These are three resources that describe and illustrate the atrocities that took place during the Rwandan Genocide in 1994 and its aftermath. 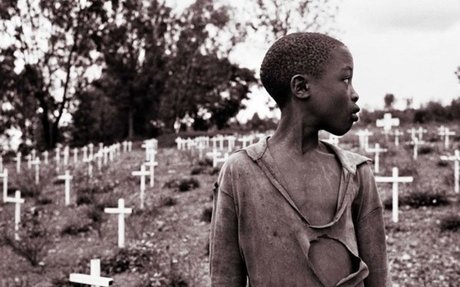 From this website I learned that there was a civil war in Rwanda in 1990 between the Hutu and the Tutsi. In 1994 it broke out into a genocide. The Hutu wanted to get rid of all the Tutsi so they spread hate propaganda over the radio and planned attacks to kill Tutsi and Hutu who would not join the cause. Over 800,000 people were murdered in 100 days, 100,000 children were orphaned, abandoned, or abducted, and 26%of the Rwandan population still suffers from post-traumatic stress today. In 1994 the International Criminal Tribunal for Rwanda was established to try to bring those responsible for the genocide to justice.

I picked this website because it tells you what led up to the genocide, what happened during the genocide, and the aftermath. There are also several pictures included that illustrate what the article is talking about.

"Approximately 800,000 Tutsis and Hutu moderates were slaughtered in a carefully organized program of genocide over 100 days, making history as the quickest killing spree the world has ever seen." 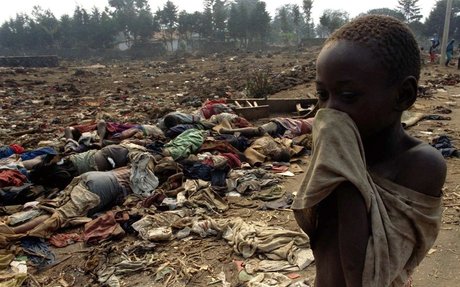 This image shows a little boy all alone looking at a field of death and destruction. It is possible he is looking for his parents who might have been taken by the Hutus or killed. Bodies of slaughtered people lie tossed about just as uncared for as the clothes and other items strewn about in the chaos.

I chose this picture because it is a good example of the death, destruction, and loss that people suffered during the Rwandan genocide. 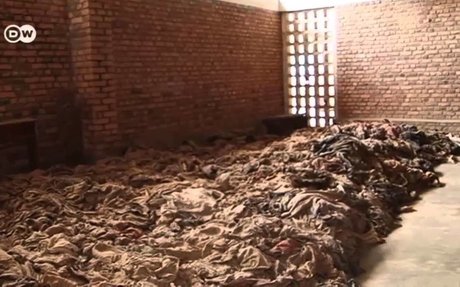 This video discusses what life is like in Rwanda twenty years after the genocide as people are trying to come to grips with what happened and rebuild their lives. One man that was interviewed said that he lost 17 family members, including 6 children, his wife, and his mother. There is still a lot of tension between the Hutu and the Tutsis. Tutsis are having a hard time reconciling what the Hutu did and still suffering since they live among those who committed attacks and their family members.

I chose this video because it shows the aftermath of the genocide and how people have tried to pick up the pieces. Many buildings have been restored by peoples' lives are still torn apart.

"The government is still trying to foster reconciliation. On an official level it no longer makes any distinctions between Hutus and Tutsis."